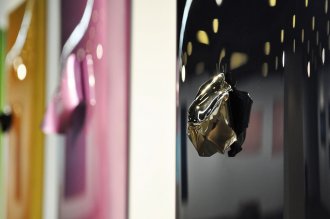 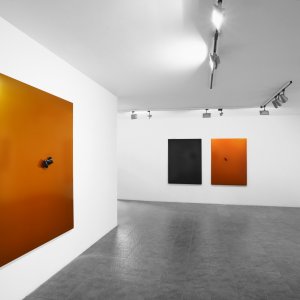 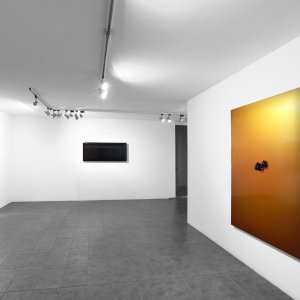 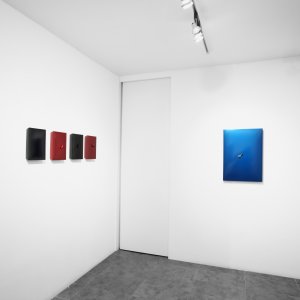 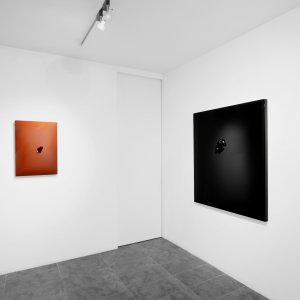 Sanzone’s creations, despite the fact that minimalist, analytical and conceptual references are obvious and openly shown, dissociate from simple quotationisms and  from tired discipleships without any originality of their own, and are instead fuelled with a strong element of independent poetry, that, in matter-color, light-reflection and image-substance binomials,  establishes all of the powerful dynamics of the senses which are found in his works.

The plastics used and the industrial technique of coloring with car bodywork paint introduce different and specific highlights, detached from the academic hierarchies imposed by traditional techniques: exactly because of this particular “objectiveness” that is imposed in, and by the artwork, sensory and visual interpretation are boosted to formulate new judgment parameters and to experience new sensitivities that can’t be separated, for example, from the refraction of the luminous element or the reading of reflections that are produced on the surface, as basic elements for a mental and meditative recognition of each work. His artwork being a mirror doesn’t only lead to a simple duplication of reality, but, because of the connotations of the color, also to a peculiar absorption in the artwork itself of reality, generating another possible truth. The duplication phenomenon of the world’s truth activates the considerations of another way to determine the perception of viewing a monochrome which, in Sanzone’s case, becomes alienating compared to the intellectuality of art, identifying himself at that point in the concreteness of reality.

In the exhibition the large dimensions of the artworks, suggested for this exclusive show, further favors the process of identification and participation of the viewer’s gaze with a new reality suggested by the untouchable concreteness of the painting, by the luminous refractions and their bright colours. Furthermore, does one await the void, or is the void itself that awaits the clarification of an identity to decipher and determine? The title remains without confirmation and ambiguous, because it’s verifiable only with a direct experience: observing Sanzone’s artworks renews the charm of imagination that has a way of looking past the horizon of its more obvious meaning, probing the purity of an unknown beauty.

The exhibition is equipped with a bilingual catalog (Italian and English) published by Progettoarrte elm, containing the curator’s critique, the reproduction of all of the  artworks on display, the arrangements and updated bio-bibliographical presentations.