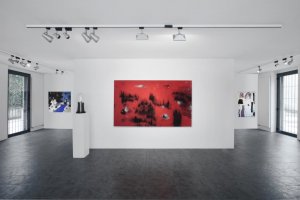 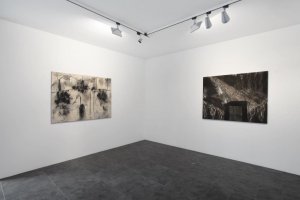 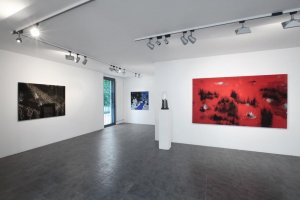 The Progettoarte elm gallery in Milan continues its investigation into the painting of artists emerged between the Seventies and Eighties with a personal exhibition curated by Ivan Quaroni and dedicated to Arcangelo, named "A sud del Mondo " (To the South of the world).

The exhibition brings together a group of works that cuts across the whole production of the artist from the 80's to the present. There are about 15 works, between paintings, sculptures and trestle papers of different cycles, from “Terra Mia”, which marked the artist Italian and German debut, the more mature series as the Planets, the Dogon and the Mysteries, to the series realized in the last decade, such as the Sanniti and the Irpinia.

The exhibition is envisioned as synthetic route in stages running through the compact and coherent artistic vision of  Arcangelo, matured in contrast to the cultural climate postmodern “Transavantgarde”, aiming the recovery of the genius loci.

Since the first cycle of works, made ​​with poor and organic materials such as soil, coals and pure pigments, it is clear that he is going towards of Arte Povera techniques. Terra Mia is a series the artist works on for several years and in which lays the basis of his modus operandi, by changing the vision of he landscape in a more passionate and carnal way. The sensuality and he physicality of the area in which he grew up, the Sannio, leads the artist to build a radical original imagery, where ancestral memories of the Italic population melt with memories of processions and with the Mediterranean splendours and scents stretching to the deep Africa.

The series  “Pianeti” and “Dogon” demonstrate the broadening of the iconographic influences, such as the tribal civilizations of the outlet of the Niger outlet (Dogon and Lobi). It is, as the German critic Andrea Jahn wrote in the 90's, "a sign of his interest in multicultural and international events, as well as his mistrust in the western positive attitude". Religion, magic, mysticism, spirituality, folklore are all over Arcangelo work even if his interpretation is more of  abstract signs and gestures as brief allusion. In fact the forms of things, objects and places appear in his paintings and sculptures as ghostly shadows or even appearances of individual and collective unconsciousness. “To the south of the World” ( A sud del Mondo) is a title that well represents the artist's search, signed by a cultural nomadism that leads him to the root of the Italic and non-European population. Therefore crossing the different cycles of work such as the Dogon the Sanniti and Irpinia, the occurrence of certain archetypal forms is constant but at the same time always changing their meaning. The sacred cosmogonies of “Pianeti”, the penitential and cross symbolism in "Misteri", the phallic reference in "Montagne Sacre", the houses and the silos of “Dogon” are appearances present from time to time in different series to underline the same origins of all the stories and all the experiences. Arcangelo vision is more poetic than anthropological, based on the intuitive observation and on the ability to interpret the spirituality of populations dear to him in the imaginative dimension of art.

Together with the historical works, many of which are exhibited for the first time, will also be presented some small works of his last series "Irpinia" dominated by earthy reds, vibrant blue and very deep blacks that sum up the magical sense of his painting, always searching the primary energy of mythical imaginative.